How to Help Children Develop Their Handwriting Skills 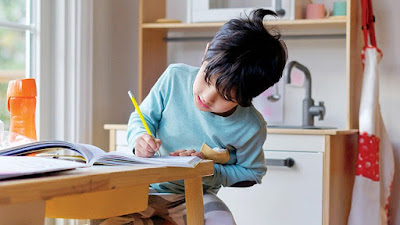 Don’t worry if your child hasn’t mastered the basics of handwriting yet. But you can definitely practise the skills that will eventually improve their penmanship.

According to Nikki Martyn, program head of early childhood studies at the University of Guelph-Humber, types of play are excellent for developing pre-writing skills.

As with most other early childhood development milestones, there’s a wide range of so-called normal. Some kids will master drawing and colouring and become proficient at penmanship early on, while others will keep building on these skills over the next few years, Martyn says. It’s important to resist the urge to compare their progress with other kids in their class.

Pre-writing skills are key to a child’s success with putting crayon to paper. For starters, they need good body control. “Sometimes when we’re talking about early writing skills, we forget that you first have to be able to sit and control your body,” says Martyn. In addition to muscle control, there’s also balance, attention and a bit of patience required. And the best way to develop these skills isn’t by sitting down with a workbook.

Building blocks, pegboard games, Play-Doh and Lego are excellent complementary play for almost-writers, says Martyn. “Another example that we’ve been seeing a lot of during the pandemic is cooking—having kids help to measure and mix ingredients,” she says. All of these activities involve developing fine motor control and using more precise movements, just like they’ll need for forming letters with a pencil.

In daycare, and then in kindergarten, cutting and pasting becomes a featured fine motor activity. “That novelty and physical sensation of cutting paper is really stimulating for them,” says Doug Ireland, a kindergarten teacher in Toronto. Another activity he uses in class to prep kids for handwriting is beading necklaces. “The act of holding a bead and putting it on a string requires a lot of fine motor skill,” says Ireland.

Kids will need to develop their grip a bit more before they can actually form their ABCs. Really young children, around 18 months, will start with a whole-hand grasp, but by age three or so, little kids are able to use their thumb, index finger and middle finger to pick up a piece of puzzle off the floor, for example, and that’s a big step closer to being able to write. Next it’s about holding a pencil, marker or crayon with those three fingers (called the tripod grip) in a more controlled way. You could also buy ergonomic pencil grips that may help.

The other parts of writing, like making the right shapes and spacing the letters, will come with practice over time, says Ireland. Children learn handwriting at their own pace, and most educators won’t worry as long as kids are making an effort and showing some progress.

If you want to spark interest and inspire your kid to try writing more often, create a variety of useful but playful pen-to-paper opportunities. You could keep a shopping list low on the fridge where they can add their requests, for example. Other ideas are writing short letters to a grandparent, or drawing and addressing a homemade card or gift tag for a friend’s birthday present. “If it’s something that’s real, it can be more meaningful, rather than an isolated activity like just copying their name,” says Ireland.

You’ll have even more success if you up the fun factor with scented markers, stickers or metallic glitter crayons—whatever it takes. You could also try writing names with bath crayons in the tub, or on the driveway with sidewalk chalk.