Activities for Your Child to Play on Their Own 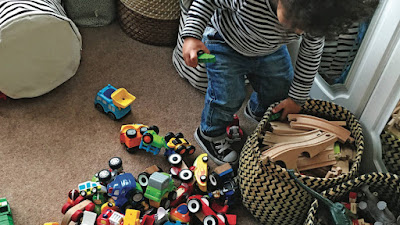 While one-on-one time is certainly important for strengthening the bond between you and your child, knowing when to give her space to play without your input is important, too.

“Play is vital to children's development. It supports them on all levels—physically, cognitively, socially, emotionally and spiritually,” says Stephenie Gillingham, program coordinator and professor of early childhood education at Sheridan College in Oakville, Ont. “What they’re gaining when they’re playing on their own is curiosity, autonomy, learning to take initiative and problem solving.”

Time spent playing independently typically extends as kids age, but the duration and ability to concentrate will be very unique to the child, Gillingham explains. “If it’s something that’s just developing, then you’ll be happy at first with just a couple of minutes. By the time children are 18 to 24 months, you’ll likely see them being able to sit for 10 to 15 minutes, engaging in things. And some kids could be very happy to spend 20 minutes to half an hour or more. It all depends on the child, your relationship and the environment—setting up a safe and comfortable space they feel secure in.”

Your toddler will actually provide clues that he is ready for unaccompanied free play. “When you’re observing your child, you’ll see those moments when he is engaged and doing something on his own that allow you to step back a little,” Gillingham says. “That may be as simple as moving from one end of the couch to the other, or moving across the room from your child. As he gets older, you can even say, ‘I’m going into the kitchen, and I’ll be right back.’” When you return to check on your toddler, it can be gratifying to see that he’s still engrossed in whatever game or toy he was playing with before you ducked out of the room.

Activities Young Children Can Do to Play on Their Own

When choosing an activity for your child to try on their own, focus on the things you know they enjoy. The activity doesn’t have to be complicated or involve a lot of toys or playsets.

Here are just a few ideas:
If you have an active kid who loves to run and climb, there are plenty of outdoor opportunities for solo play, too. Giving your little one space to explore the playground on his own—while keeping a watchful eye —is a great example. “The nature of a playground is actually aligned more to solitary play,” says Gillingham. “There are other kids around, but your child isn’t always paying attention to what they’re doing.” Indoors, let your toddler dance to music or make a pillow fort. Taking this step back helps his independence—and imagination—flourish.

Mastering alone time and independent play is an important toddler development milestone. Bonus: You get a few minutes to relax! Here at Discovery Point Nursery and Academy, we provide activities throughout the day that engage the children in independent play time. Talk to your child's teacher for more great ideas!